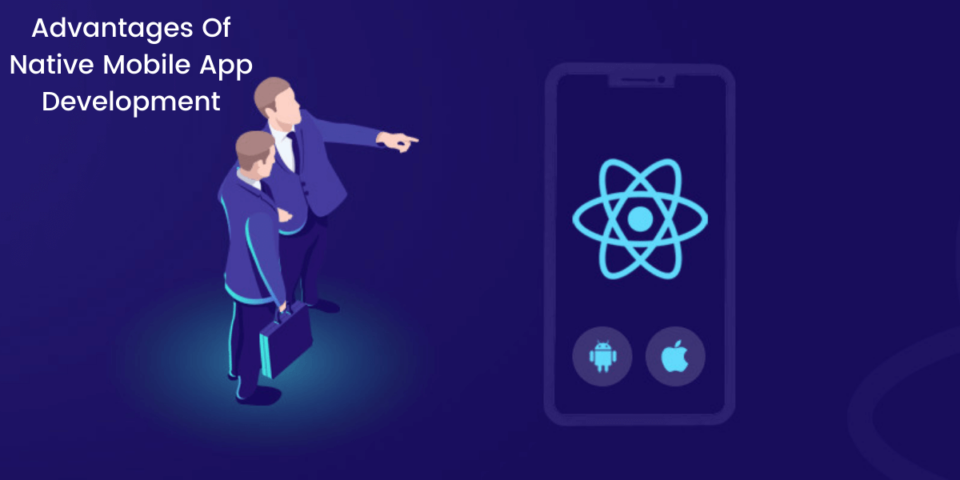 Mobile apps are a great way for businesses to engage with their customers.

Therefore, you will see that many online companies are developing their mobile apps to serve their customers.

When you plan to build a mobile app for your business, then you may get puzzled while deciding whether to develop a native app or a hybrid app.

Both of these have their pros and cons. However, compared to hybrid apps, native apps offer many advantages.

In this article, we will share with you the benefits that you would get by developing a native mobile application to wow your customers with amazing performance and capabilities.

Native apps can optimally utilize the components of the user’s smartphones to give them a fantastic experience.

Due to this reason, it is advantageous to build a native app despite the extra cost and effort you have to spend on developing it.

Since the developer uses the platform core programming language and APIs to create native apps, it makes them more efficient.

Furthermore, these apps are compiled and installed on the mobile phone of the users. It allows them to leverage the processing speed of the device to give a blazing fast performance.

In comparison, the hybrid app performance is affected by the internet speed that is not in the case of the native app.

The native app is available in the app store

One of the biggest advantages of a native app is that you can display it in the App Store.

A customer looking for an app will always go to the App Store to find an app that would satisfy his/her needs.

Therefore, your app must be launched in the App Store to improve its visibility amongst your target audience.

As the App Store only displays native apps, your app gets additional mileage compared to a hybrid app in terms of brand awareness and visibility.

Native apps are more secure than hybrid apps because they are protected by the operating system itself. On the other hand, hybrid apps rely on system browser security.

Furthermore, the native apps use the official APIs that are rigorously tested across various systems.

Compared to this, the hybrid apps rely on third-party systems, which increase their vulnerability.

As the native apps use the inbuilt features of the smartphone, they are more responsive and faster.

As the native apps are written in a language that is specific to a platform, they can access the unique elements and APIs, which allows them to run smoothly.

As these apps can utilize the exceptional elements and APIs which are optimized for multiple devices, they operate effectively.

The native app uses the APIs, which give the developers a greater field for creativity.

Additionally, if the existing API doesn’t give you the freedom to express your creativity to the fullest, then you can always build the APIs that allow you to do so.

Read More:   How to Recover Deleted Photos Or Media From Your Computer

This allows the developer to add additional features in the native mobile apps more easily compared to the hybrid app.

When you are developing the app, you don’t have to rely on cross-platform tools.

This makes it easier to maintain and also the number of bugs is comparatively lesser than the hybrid apps, wherein you have to maintain two app codes (compared to one in a native app).

In the native app, the entire UI is standardized, which in turn reduces the learning curve resulting in an improved user experience.

While creating a native application, the app designers can apply the best standards that significantly improve the user experience through a highly interactive user interface.

It integrates better with mobile hardware

One of the significant advantages of using a native app is that it can leverage the inbuilt hardware capabilities of a smartphone such as GPS, accelerometer, camera, and others.

Since the native apps are built for a specific platform, it can naturally interact with the hardware components of a smartphone.

Since native apps focus on only one platform, you can configure it faster as there are no compatibility issues that need to be sorted out.

Moreover, if there are two native projects, they are unique, thus, you don’t need to stress about the accord of an app reliance in multiple versions for different platforms such as Android or iOS and you can integrate all the features in your desired platform.

As such, apps offer fewer limitations; the developers can easily scale up if such a requirement arises.

Native apps can work offline too

If you develop your native app, then it will allow the users of your app to use it even if there is no connectivity.

In a native app, a lot of the data is stored in the smartphone of the app user, which allows them to use some of its features without needing an internet connection.

Stability of the app

Operating platforms like Android and iOS offer continuous support to enhance the performance of their platforms as well as the app builders.

This ensures that the native apps that are specific to a particular platform will be more stable and have fewer maintenance issues compared to hybrid apps that use cross-platform frameworks.

Native apps offer a high degree of reliability and stability. If you want to optimize the users’ experience, the native app is the best answer that ticks all the boxes.

However, the budget is one of the reasons due to which people prefer to go with hybrid apps. Despite your budget, if you develop a native app, it will be beneficial to you in the long run.

This comparison between native and hybrid apps has been running since the introduction of hybrid frameworks in the market. If you are confused about whether to choose native or hybrid, then refer to this blog on the native vs hybrid app.

From this blog, you will have an in-depth understanding of hybrid, and you can decide to build a great app on a relevant platform that would help you to achieve your business goals.

7 Reasons to do Six Sigma Certification Course in 2020

How To Solve Discord RTC Connecting Issue With Easy Steps

6 Reasons Why Mobile Website Design is beneficial For Law Firms

About Famous and Royal luxury trains In India

Reasons Why Enterprise should invest in Android app development