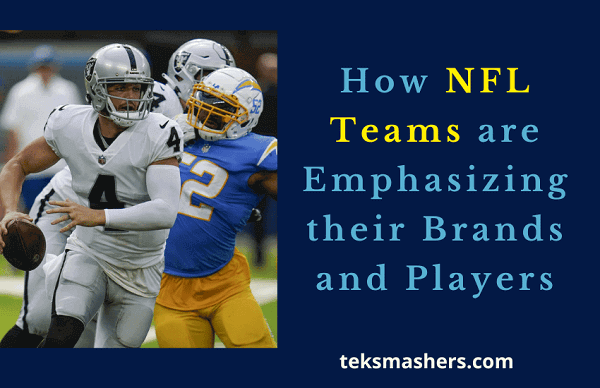 The emergence of technology has changed the way people consume sports. In the good ole days, everything was printed on paper, and there were opportunities to see interviews and highlights on television. But everything is at everyone’s fingertips at any moment.

People no longer use the paper to determine fantasy football winners, but they can get the latest NFL odds and make bets as plays are happening. The legalization of sports betting is one of the more bizarre developments over time but greatly illustrates how fans spend their time during games.

Everybody has a cell phone these days. The mini-computers that fit in someone’s jeans give people access to anything they could want to look up. During games, that includes highlights, graphics, stats, and plenty more.

It’s allowed for changes on all levels – the way television broadcasts games, the way different mediums cover teams and games, and, the most extensive development, how teams are emphasizing their brands.

It is undeniable that social media channels can be one of the worst things out there for people. It is indisputable that social media is essential to everyday life. People will open Twitter to scroll for a mental reprieve between meetings. Others will resort to TikTok for whatever form of entertainment their feeds are curated for. Younger generations are using Instagram and Snapchat as ways to communicate.

With access to all of these mediums, among others like the powerful Facebook, teams have adapted and developed their own social media teams, marketing, and funds explicitly dedicated to social media channels and market analysis on the different demographics to ensure the right content is hitting on the right platforms.

Read More:   The Top 7 Blogging Best Practices You Have to Know

The sidelines have become crowded with more than traditional media. Each team brings multiple people to document games with photography and videography. They get highlights to social media feeds in an instant. There are photos for graphics and other posts to engage an audience. Someone is working in the press box to make different graphics and content to post throughout the game.

It’s something that helps the players build and develop their brands, too. The teams do plenty throughout the week, such as a question of the day before or after practice. The teams have exclusive access to their events and can provide unique, easy-to-create content rather quickly.

Other events will include off-the-field charity work. That allows the players to be highlighted, in part, for who they are off the field and celebrates causes they are passionate about. A big goal of media entities is to humanize the players so that casual fans can relate to them, and teams do a great job with social media to do that as well.

The national outlook goes beyond what the teams do, too. It’s interesting to see leagues and media companies lean into publishing NFL lines. They will be posted on graphics if a player hits over or under and essentially encourages gambling.

The National Football League uses social media for its marketing purposes. The most significant organization in the country, and arguably the world, is excellent at pushing its brand. An example of this is there is a team in Las Vegas now, while decades ago, there wouldn’t be Vegas NFL odds listed anywhere near the content being put out. Also make a tremendous one-handed catch? It will be a sponsored social media post for a week or more. Have a hilarious quote? There will be a graphic or video shared in light of the situation.

Read More:   Lines, Angles, And The Properties You Need To Know.

Final score graphics will include a Player of the Game or other content like the leader in different statistical categories. It is all aimed at marketing the league and its accomplishments and the accomplishments of those players.

The league will also take crazy stats that its researchers find and produce graphics, such as Detroit Lions running back Jamaal Williams rushing for 13 touchdowns in his first 73 career games and producing 14 touchdowns in 12 games this season. They also will gather reactions, such as adding tweets of famous players to a crazy outfit a player wore walking into the game.

In the latest age of technology and with users consistently on social media, the NFL and its teams are solid in promoting their brands.

14 Tips to Take Care of Your Laptop in Summer

What are the best online casinos to play?

Lines, Angles, And The Properties You Need To Know.

How to Compress a Video for Your Social Media

What Problems Does A Student Face While Investing In Share Market?