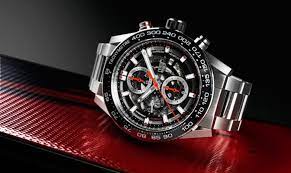 Read More:   How to write a perfect guest post pitch

By manually winding the crown, power is supplied to both barrels at the same time. The stop-high watch’s frequency balance wheel oscillates at 50 hertz, providing incredible accuracy. The watch’s balance wheel oscillates at 4 hertz. The central, brown section of the dial has three sub-dials: a minutes counter at three o’clock, a chronograph second counter at 6, and a small second counter at nine o’clock. The watch’s dial also features a chronograph power reserve percentage indicator at 12 o’clock. The dark brown leather strap is perfectly complemented by a 43 millimeter solid gold case.

This magnificent timepiece honors the Carrera’s creator, the brand’s Honorary Chairman Jack Heuer, by being inspired by the two-part construction of Heuer stopwatches. They used technology from the Formula One industry and aeronautics to create the inner part of its case, which is hand-brushed and polished to a high sheen of black titanium carbide steel. The steel cage has been polished, finely brushed, and sandblasted.

The dial of the Carrera Calibre 1887 Jack Heuer 50th Anniversary Edition watch is distinguished by its two-part design. The central part of the dial is sunburst silver and has Chrono counters and a date indicator, while the outer anthracite dial has applied hour markers and is also decorated with sunburst finishes. The case of Jack Heuer’s watch has a diameter of 45 mm. Like vintage Heuer stopwatches; the outer rim is inscribed with tachymeter and pulsometer scales. The Caliber 1887’s beauty can be appreciated through the smoked sapphire-crystal caseback.

The Aquaracer 500m Caliber 5 Leonardo DiCaprio Limited Edition sends a strong message about the value of environmental protection. With minor design differences, this excellent diving watch shares all of the qualities of the Tag Heuer Aquaracer 500m Caliber 5. The dial of the Leonardo DiCaprio Limited Edition is an electric dark blue with a line effect that signifies the earth’s meridians. At six o’clock, there is either the National Resource Defense Council or the Green Cross International logo. Other differences include the unidirectional bezel, which is coated with blue rubber for easy grip, and the watch bracelet. The watch is available with either a blue rubber strap and solid steel clasp or a three-row steel bracelet.

It is powered by an in-house Caliber 5 automatic movement, which is also found in the TAG Heuer Carrera Automatic worn by Leonardo DiCaprio in the film Inception. This is a high-end diving watch that has been subjected to rigorous testing underwater to ensure resistance up to 500 meters. It is protected by an automatic helium valve at 10 o’clock that regulates water pressure. It is protected by a scratch-resistant sapphire crystal with anti-reflective treatment, which provides a clear view of the luminescent hands and markers and excellent visibility in low-light conditions. These watches were made in a limited quantity for both professional and amateur divers, as well as for anyone who wants to support the great cause that inspired this edition.

The Tag Heuer Formula 1 Grande Date Chronograph Watch is modern and appealing, but it is most notable for its functionality. The case is made of brushed or polished stainless steel, as well as steel coated in black titanium carbide. Finely brushed steel numbers are set in a polished stainless steel bezel with a black PVD coating. It has a 44 mm case, putting it in the category of large sport watches. However, due to its attractive design and thickness of 14.85 mm, this timepiece is suitable for almost any size of a man’s wrist.

Read More:   How to Survive on a Student Budget

A screw-in crown with a black titanium carbide coating and the TH Logo is secured with double gaskets. When combined with the unidirectional turning bezel, they become essential components for underwater activities. It can be used in water because it can withstand pressures of up to 200 meters (660 feet). It has three subdials, the largest of which is located at 6 o’clock and serves as the 1/10 second counter for the first 30 minutes before becoming the hour counter. The twin hands semicircular minutes counter is at 9 o’clock, while the running seconds sub-dial is at three o’clock. The Grande Date window can be found at 12 o’clock. On the dial’s outer rim is a tachymeter scale. Tag Heuer Formula 1 Grande Date Chronograph comes in six varieties of styles.

A TAG Heuer men’s watch is an excellent addition to a well-rounded collection of fine timepieces. The brand is prominent for its sports appeal and celebrity-led marketing campaigns, making it almost universally relatable. Tag Heuer is well-known for its automotive racing roots, innovative thinking in the evolution of the chronograph, and fascinating technologies in the watchmaking industry.

why confectioner must keep pie boxes in their shops?

How To Solve Discord RTC Connecting Issue With Easy Steps

Planning to pursue a UI UX course in Mumbai?